As of Jan 1, 2015 the West Africa Ebola outbreak has now claimed 7989 lives, and even though we live on an isolated island (NZ) half a world away from the hot spot, it is still very frightening.

There are three undeniable stages in the progression of deadly viruses like Ebola: Infection, separation and death.

It is fascinating to realise that sin shares the same progression. Let’s liken sin to a virus for a moment… The Sin Virus.

Deadly viruses are highly infectious. Sin, simply defined, is doing anything that God isn’t happy with. If you have sinned, you have been infected with the Sin Virus.

All have sinned, all fall short of God’s glorious standard. (The Bible, Romans 3:23)

People die from deadly viruses. What makes the Sin Virus more terrifying than any other virus, is that it just doesn’t kill your body, it kills your soul. The final destination for people that have died contaminated with the Sin virus, is eternal separation from God.

People infected with the Sin virus realise that all is not well within them. They try desperately to find a cure…

They try to be a good person. The truth is that good people die from deadly viruses all the time. Being a good person won’t save you from the Sin Virus.

They becoming immersed in religion. The truth is that religious people die from deadly viruses all the time. Being a religious person won’t save you from the Sin Virus.

Once a person’s blood is contaminated, the infected blood must be replace with clean blood. The only cure for the Sin Virus is clean blood. If only there was a person whose blood was sinless? I have good news for you… There is such a person.

There is salvation in no one else! There is no other name in all of heaven for people to call on to save them. (Acts 4:12 – The Bible)

Jesus Christ, God’s Son, gave His life, so that we could be cleansed from the Sin Virus. God knew that the Sin virus would infect all of mankind, and He sent His Son, Jesus, to be born as a human, with clean blood. Jesus never sinned which meant that He was never infected with the Sin virus, and because of that, He was the only person, ever, qualified to give His blood as the one and only antidote for sin.

For God so loved the world that he gave his only Son, so that everyone who believes in him will not perish but have eternal life. God did not send his Son into the world to condemn it, but to save it. (The Bible, John 3:16-17) 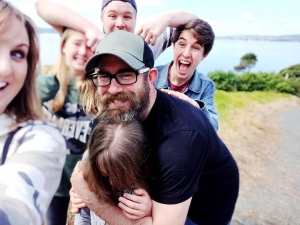