The Vasa was a Swedish warship built 1626-1628. It was designed to be the most powerful ship in the Swedish Navy and was richly decorated as a symbol of the king’s ambitions for Sweden and himself. Upon completion the Vasa was one of the most powerfully armed vessels in the world.

However, the boat was dangerously unstable due to too much weight in the upper structure of the hull and insufficient ballast to compensate. This was mostly due to the weight of the ornate trappings and the cannons made of brass.

Despite an obvious lack of stability in port, the Vasa set sail on her maiden voyage on 10 August 1628 with much fanfare and celebration.

Tragically, after sailing less than one nautical mile, upon encountering wind stronger than a breeze, the Vasa foundered and sank.  The glorious flagship and national symbol of Swedish military might became a symbol of humiliation, failure and disgrace within minutes of setting sail.

How could things have gone so wrong? Here’s what history teaches us:

– Too much attention was given to the outward appearance of the ship – the extravagant ornaments and trappings.

– Too little attention was given to the ship’s ballast – the heavy material placed in the bilge of the ship to ensure its stability.

– The king was impatient to see her take up her station as flagship.

– The king’s subordinates lacked the courage to openly discuss the ship’s structural problems or to have the maiden voyage postponed.

[pullquote align=right]
If only Vasa had the weight and stability under the waterline needed to handle her glory above the waterline.
[/pullquote]We can learn much from the fateful voyage of the Vasa.

How much time do we spend on our persona, the aspect of someone’s character that is presented to or perceived by others, compared to the time we spend developing depth of character and relationship with God?  Or put another way…

Do we invest too much into our outward appearance – the ornaments, trappings and trinkets of our lives and do we invest too little into our personal ballast – the depth of character that will keep us stable in times of turbulence?

We may look and play the part of having it all together perfectly, but unless we have built sufficient ballast in our lives, when the storms of life hit us we will founder.  And storms will come – it’s not a matter of ‘if’, it is a matter of ‘when’.

Wickedness never brings stability, but the godly have deep roots.
(The Bible – Proverbs 1:3)

The wreck of the Vasa was raised in 1961, and after decades of restoration, she is now the greatest tourist attraction in Sweden.  People in their hundreds of thousands visit the Vasa Museum every year and hear the story of the greatest naval faux pas in history.

What a way to be remembered.  If only Vasa had the weight and stability under the waterline needed to handle her glory above the waterline. 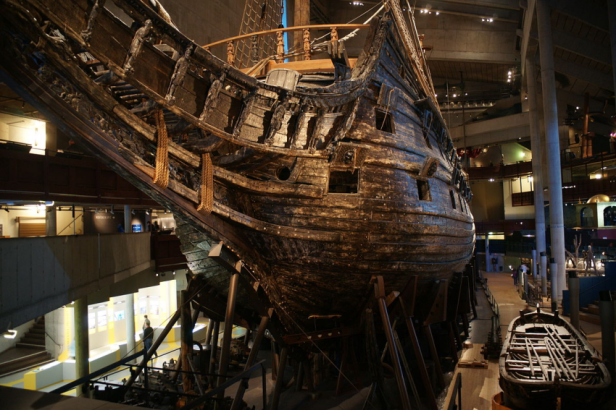 Links of interest: The Vasa Museum, The Vasa Wikipedia entry